Sad Tale of a Studded Top

Today was one of those days. I woke up for some reason feeling the weight of world on me for no good reason. Then I remembered it was fashion week time.

It’s been a couple of years since I the last time I was part of fashion week and I miss it. I miss the backstage drama, not that the drama is fun when you are amidst it all but afterwards it all seems to be so worth it. I remember the very first London fashion week I was at. I was backstage at Bora Aksu’s show whom I was working for at that time and I was in charge of dressing one of the models for the show and my model was late. And by late I mean she showed up about ten minutes before she was supposed to be on the stage. I remember being on the floor shuffling behind her trying to put her shoe on and lacing it up and being nearly dragged on to the stage cause she couldn’t stand still for two seconds for me to lace up her shoes and then I had to run back and sew something that had torn off I was in a panic and my hands shook and my hands never shake. I am really good at hand sewing but with all the adrenaline of backstage I couldn’t even thread my needle!

I remember my own graduate fashion show. It was the best day of my life but I was a mess. it was such a rush to have my stuff on the catwalk and I was our school’s closing collection. I had worked so hard on my collection, to be honest we all had every single person on my fashion course worked their asses off to get on to the catwalk show and we knew that only a handful of us could get on the show. I only hoped I would be chosen, I couldn’t fathom being the closing act.

I had made a collection inspired by armour and the alien creature from the alien movies and I was damn proud of it. The models came down the runway to a blaring siouxsie Sioux song and then it was over in about 60 seconds. I loved all the pieces I had made but one was my pride and joy, a studded top and legging worn under a black dress. I got quite a few orders for that dress too!! It took me night after night of staying up until 3-4 in the morning after full days of being in the studio at school from 8am till 9pm to finish sewing on all those studs. the studs were sewn after the top was finished so the beading line would be continuous , you could imagine how laborious it was sewing each bead making sure the spacing was right and the piece was getting heavier by the second and harder to hold and sew, getting into the smaller parts of the sleeve .But I loved it. It was such a wonderful piece. And here is the problem; it “was” not “is” as it was stolen from me. 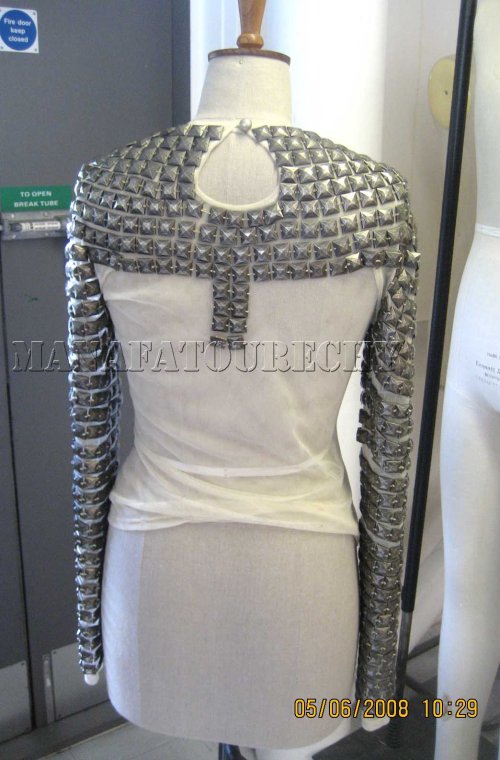 But these are not the reasons why I am so mad, sad and frustrated today. All these emotions came along because I saw one of those facebook friendship notifications in my email today asking me if I knew a Richard Shoyemi.

After the Graduate fashion show I was contacted by this guy telling me his name was Richard Shoyemi and he was a stylist he loved my stuff and he wanted to use my work for a shoot. I was young I was very stupid and I was just getting out of fashion school with no experience and I thought having my stuff in some sort of a magazine would benefit me. I even googled him and there were loads of articles and stuff on him so I gave him the pieces he had asked for.

that was one call I wish I had missed and Did I live to regret it. He took 5 of my garments. I thank god everyday that I was able to get three of them back after months and months of calling him nonstop. But he never returned my studded top and legging. I dogged him for over 6 months he stopped picking up, he would have other people answer his phone, then one day he said he would post them, I told him I wanted the photos he had promised me of my garments as well and I said I would come and get all of it from him in person. I didn’t want him to blame it on being lost in the post. When I refused to have him post it he said he had lost them and hung up.

I didn’t give up! I called the magazine he said he had wanted the garments for, they didn’t have the photos, they said they would talk to him all the stuff. I even as a last resort went to the police asking if there was anything I could do. But I am a small fish in a humongous pond and worst things happen in the world so why would anyone care about something so small, which is unfortunately totally understandable. If only our biggest problems in the world were getting garments from back from untrustworthy stylists!

This last year since moving to America I gave up on getting my garments back, four years after they were stolen. I don’t think about the pieces that often anymore and I was at peace even though I always have an eye out to see if I see it pop up anywhere. But that was all until I got that bloody notification email asking me if I knew Richard Shoyemi.

Yes I know him, I know him as the guy who stole two pieces from my graduate fashion show. Two pieces that cost about £400 in materials alone, I don’t even want to think about how many hours I spend on sewing the pieces together and finishing it off. 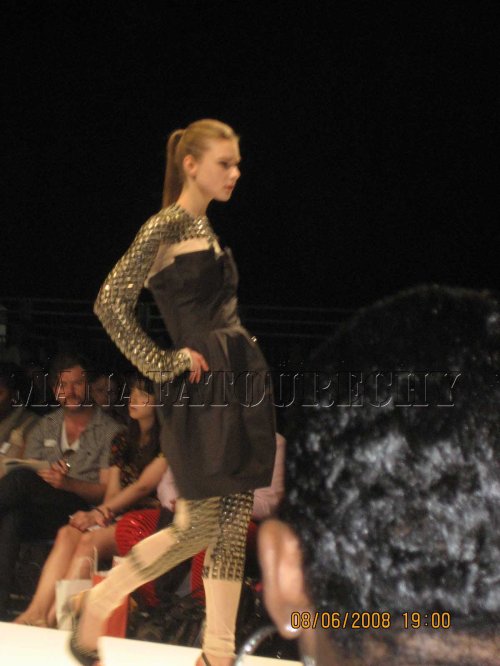 And what finally broke me was the fact that when I looked through his facebook page I saw that he had used my piece in one of his shoots and he told me he hadn’t. The picture was right there. When I saw it my heart sank to the bottom of my stomach, I felt such sadness it overwhelmed me .the picture below is the one i found with my studded leggings, the dress is not mine and I don’t know whose it is since no credits were given to anyone in these photos:

I am probably never going to get to hold my pieces in my hands again, I wish I had said a proper goodbye to them before I sent them away for the photo shoot. I wish I had looked at them one last time before putting them in the garment bag and handing them over. I am just so glad that we were encouraged to photograph our work and I am glad I have photos of these two pieces to look at and reminisce.

I know I am talking about some pieces of fabric and beads and it is just fashion, nothing deep, no life and death situation but they were made with such love and care that I cannot help but be filled with sorrow.